Only moments ago, the geek in me was excited as a kid on Christmas Eve. I didn't know how I would sleep between now and the momentous day when Instructables.com declares a winner for their Pi Day contest. I think I have a serious contender for winning the iPad2, engraved with 314 digits of Pi. What could be more exciting for a true math geek?!

What a difference a few minutes make. Now this geek is feeling strangled by the noose that can plague all geeks -- non-math related details. (Anything non-numbers related is superficial fluff, right?) When I first looked at the contest, I thought it was by a site called "Serious Eats". I thought all I had to do was make something that at least looked edible on camera that is related to Pi. What? There's more?

My creative and geek sides worked together in the most harmonious way to create an amazing entry. I took a photo of the finished pie that looks damn good, if I do say so myself. I just went to the contest site to submit my entry, and there were the details laughing at me. I can't submit just ONE photo and have it considered an Instructable! I have to include SEVERAL photos -- Here are the ingredients you'll need, here's Carol Merrall cutting the pie crust, here's what it looks like before it goes into the oven...and so on. Details! 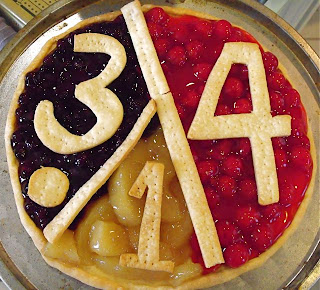 Since I can't deconstruct my beautiful entry, I have to decide if it is worth it to go to the store, buy the ingredients again, and bring them home for an all-out photo shoot documenting every step. It's not that it takes a lot of time and effort...it's more that it's like asking someone to do a long division problem just to watch them do it. It was fun and exciting the first time around because it was problem solving at it's best. Now it isn't a problem to be solved. It's a rote process.

Making that comparison, now I understand why students get so bored with math. We often ask them to recreate the pie over and over again just so we can watch them do it. We need to offer them more opportunities to solve a problem they find fun and engaging.
Posted by Unknown at 2:38 PM